Home » Blog » Basic Braids – How many types of braids are there?

Basic Braids – How many types of braids are there?

Curious about braiding but tired of the same old three-strand twists? Let’s take a minute to reexamine the classics and explore some unique braiding ideas that will keep your locks lovely and inspired.

Most of you are familiar with the concept of French braiding, especially if you had unruly hair as a child. To appease my mother, and my wild tangles, my hair was always in a French braid after bath time.

Plus, when I woke up the next morning, my messy, flat hair had miraculously transformed into mermaid waves. Needless to say, I thought my mom’s French braids were pure magic.

Contrary to popular belief, neither the French nor our mothers invented the French braid, or at least, Western mothers didn’t.

The French braid originated in Northern Africa nearly 6,000 years ago and eventually made its way into the Greek, Celtic and Chinese culture before it ever reached the Western hemisphere. Although improperly named, French braiding is a classic hair masterpiece that has been appreciated and adapted, transcending centuries of hair evolution.

The most confusing aspect of classical braiding is the very subtle difference between French and Dutch braiding. French braids and Dutch braids are basically an inside-out version of each other if that makes any sense. A French braid is achieved by intertwining three strands of hair, just like a regular braid, however when french braiding, new strands of hair are added to each side of the braid and subsequently overlap the original center strand.

To achieve a Dutch braid, new strands of hair are added to each side of the braid in the same manner. However, these new strands underlap the original center strand. These two basic braid styles are the foundational basis of some of the more unique and creative braiding styles we have been seeing on the runway and the red carpet.

In my experience, great hair is created with four essential ingredients: fashion, function, individual personality and deconstruction. And now that we’ve covered the basics let’s talk about that mysterious fourth element: deconstruction.

The key to deconstructing a braid is to start with a nice, neat, not too tight, but just tight enough braid. To start, divide your hair into three equal strands. If you are wanting to achieve a deconstructed French braid, make sure your newly added sections are consistent and match the amount of hair you gathered for your first three strands.

Once you have completed your nice and neat braid, secure the end with an elastic, then take a firm hold of the outside edges of the bottom of the braid, and pull them apart. Pull as hard as you can without making the elastic tie pop off the end, which is pretty hard, but not too hard. Now, work your way up that braid while pulling the edges apart. Then, start back at the end of the braid and pull it apart again, but this time, try to grab two of the outer segments of the braid at a time instead of just one in order to pull wider sections. Work your way up the braid again, contenting to pull wider sections of your braid out and apart.

How To Make A Dutch Braid 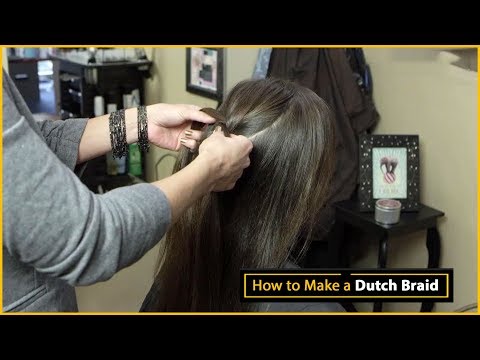 Hello out there to all you fashion-hungry Blufashion.com readers! My name is Iskra Banovic, and I'm a fashion writer. As the fashion expert for blufashion.com, I wish to bring a creative, informative, and inspiring aspect to the fashion content you have come to trust.